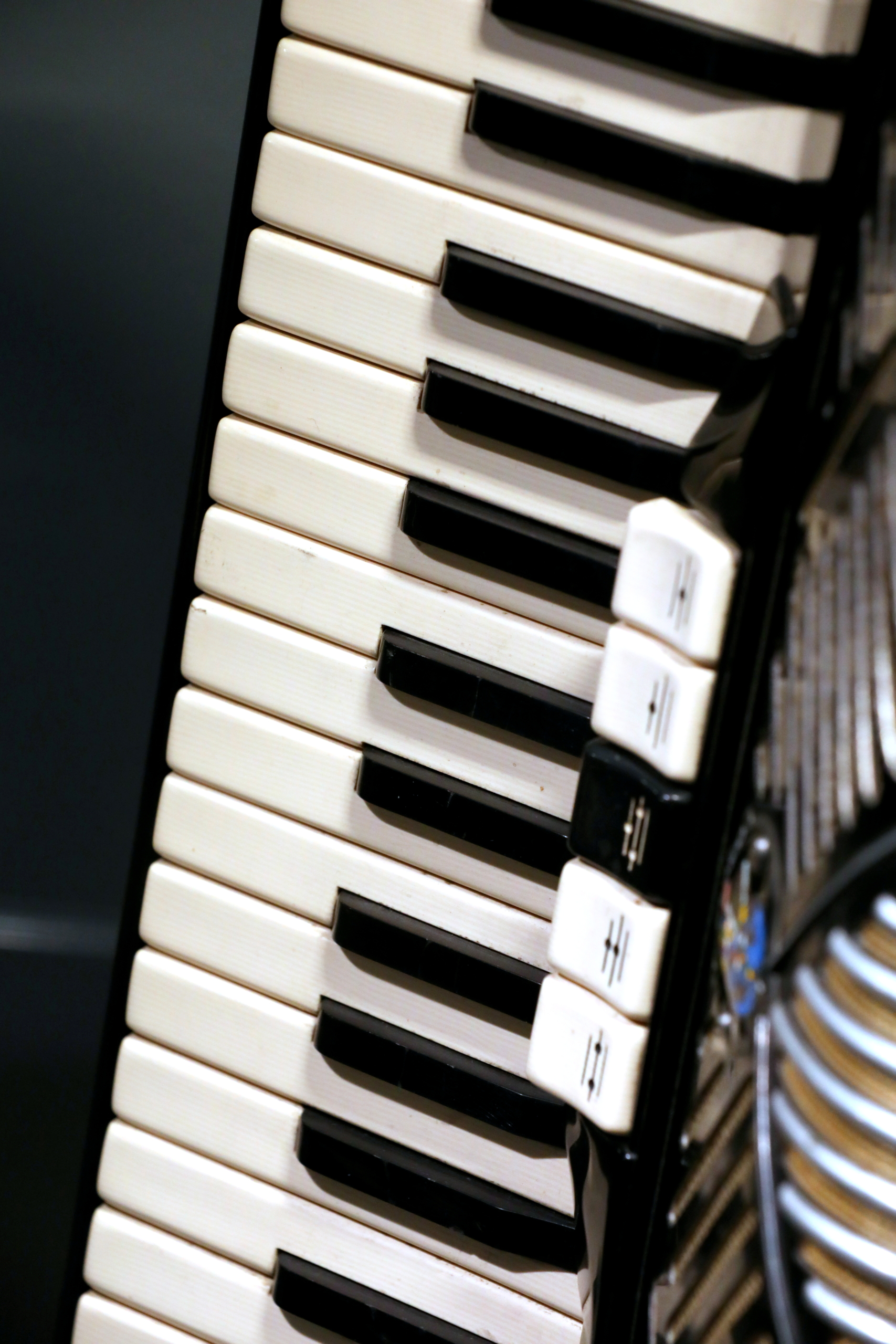 How the accordion works

The accordion (from 19th-century German Akkordeon, from Akkord—”musical chord, concord of sounds”-  N.B. the Italian “fisarmonica” comes from the German physharmonika, composed of the Greek words phŷsa – bellows and harmonikós – harmonic) is an aerophone instrument with free metal reeds, powered by a central bellows. The latter, operated in the two directions of opening and closing, blows air into the two opposing boxes (corresponding to the right-hand and left-hand manual) inside which numerous metal reeds are placed, arranged in special wooden housings, called reed blocks.

The accordionist, playing the right and left keyboards, activates a mechanism of levers and springs that allows the opening of special holes, formed in line with the reed blocks. The opening of the holes, coupled with the movement of the bellows, allows the air to pass through which causes the reeds, made of steel spring or “piano wire”, to vibrate. These are fixed on a support plate (see figure) and are coupled so as to produce the sound both in opening and closing of the bellows.

The right-hand manual of the accordion can be made with a piano keyboard or with a button keyboard consisting of four or five rows of buttons. The left-hand manual is always a button keyboard and can have two types of sound arrangement systems: the first, with pre-composed basses and chords, is the system that performs the function of accompaniment, while the second has several octaves of single sounds as with the right-hand manual.
Both accordion manuals can be equipped with registers, which allow the combination of reeds of different octaves to obtain new tones.

Each accordion is made up of thousands of pieces of different materials, these include fir, maple, mahogany and walnut wood, steel, duralumin, brass, cashmere, cardboard, felt, canvas, as well as leather, celluloid, rubber and beeswax.

All these materials are expertly worked and assembled by the craftsmen who have always worked passionately and professionally, nurturing the tradition of Castelfidardo’s accordion industry now focused on the new generations. 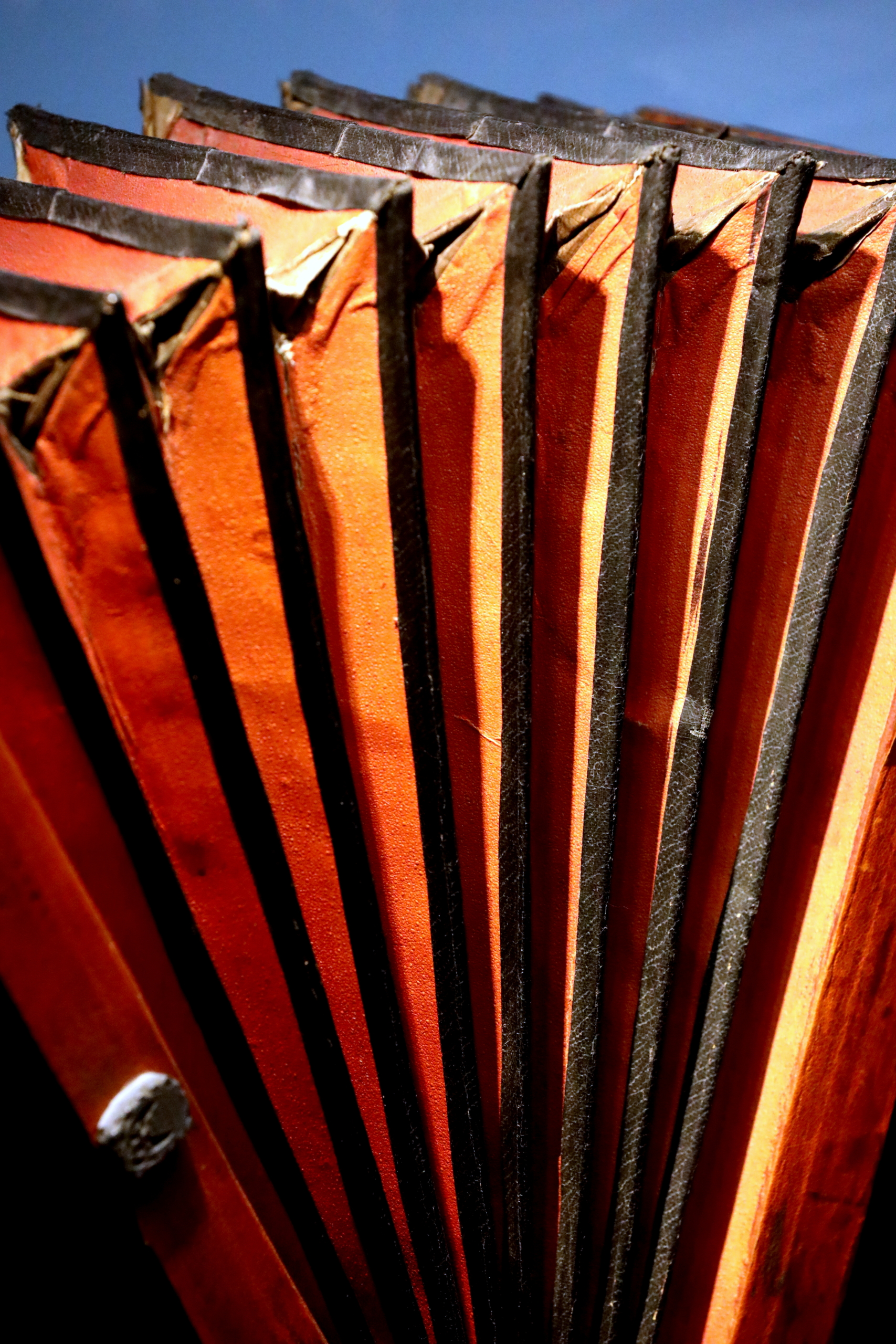 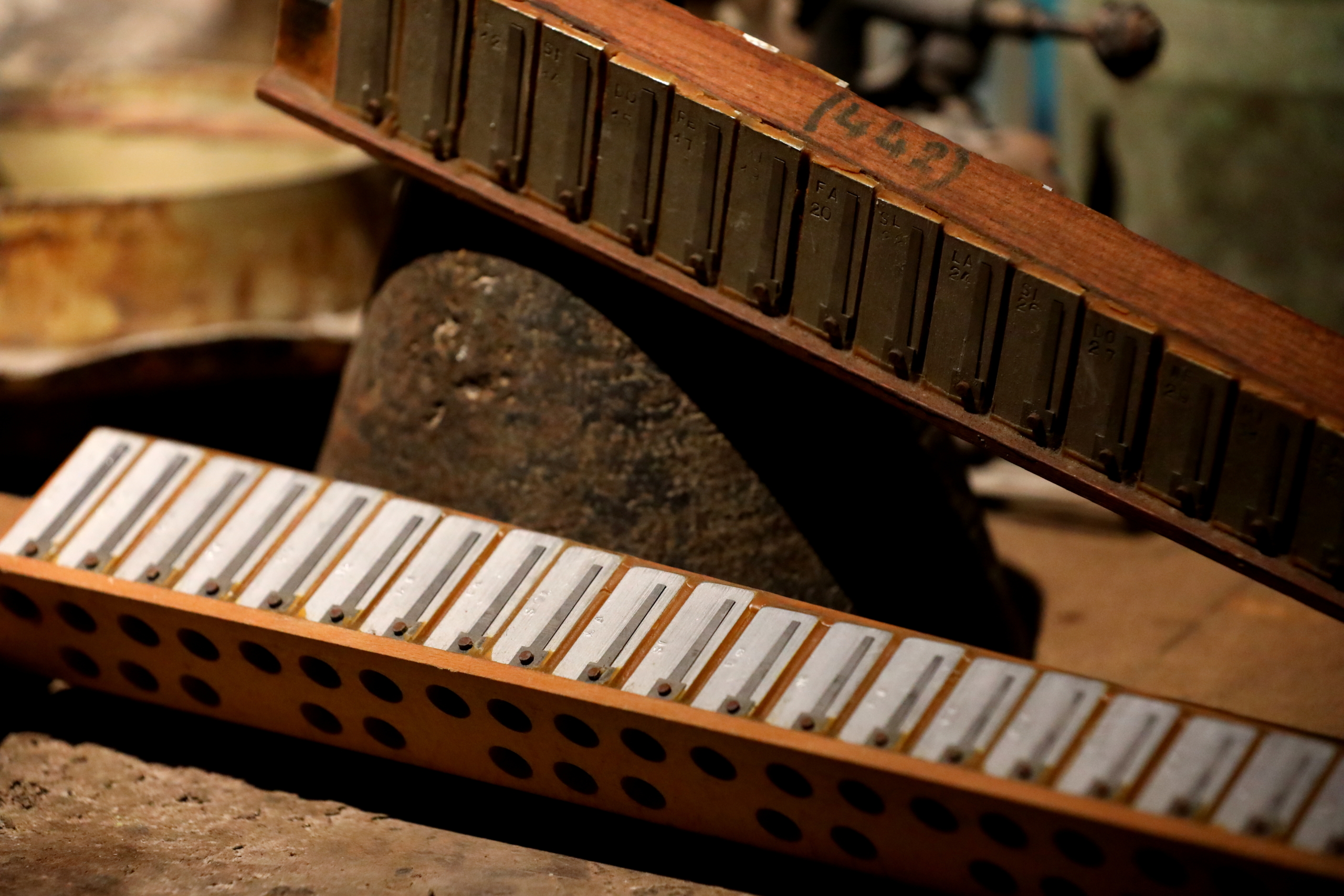 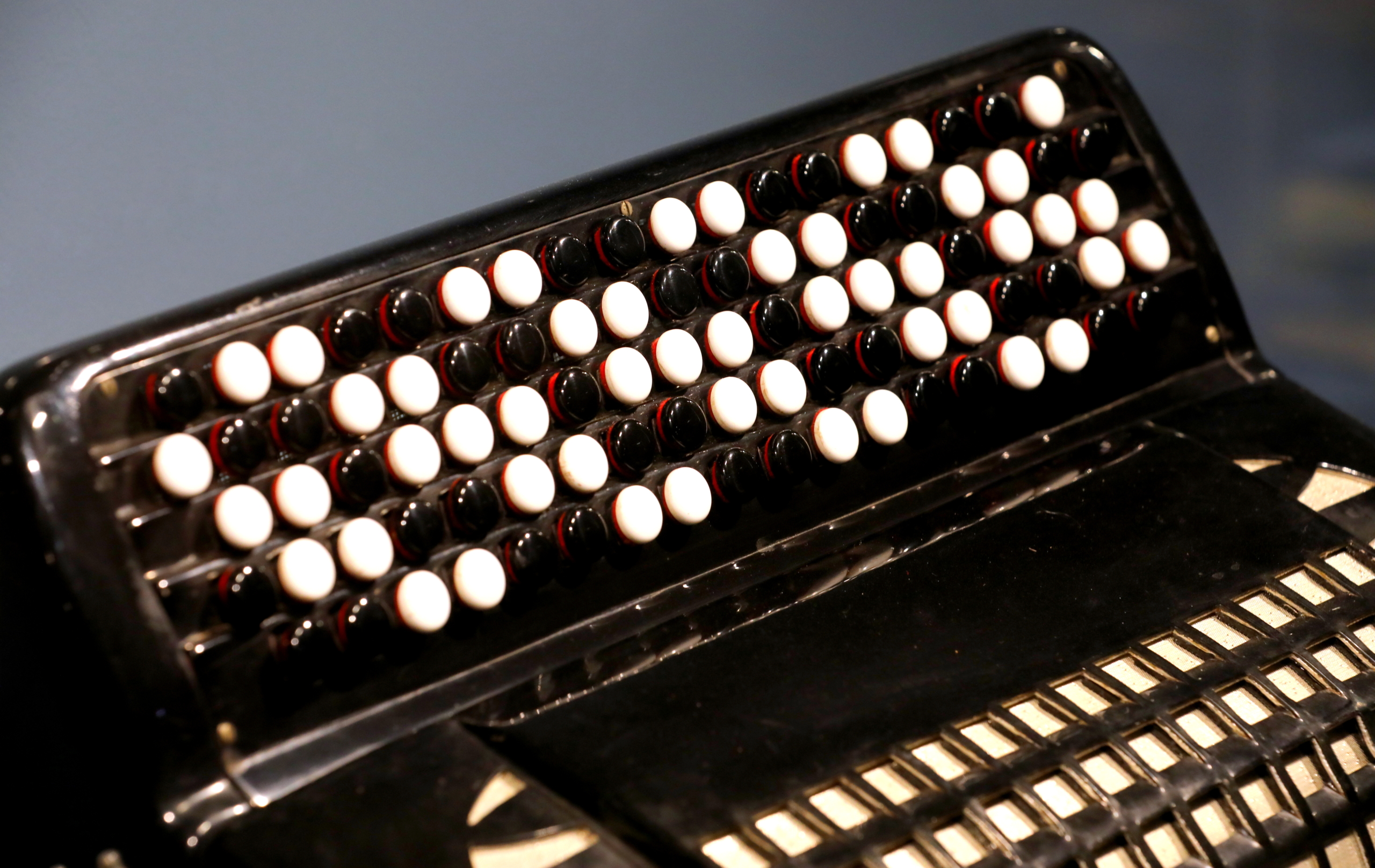 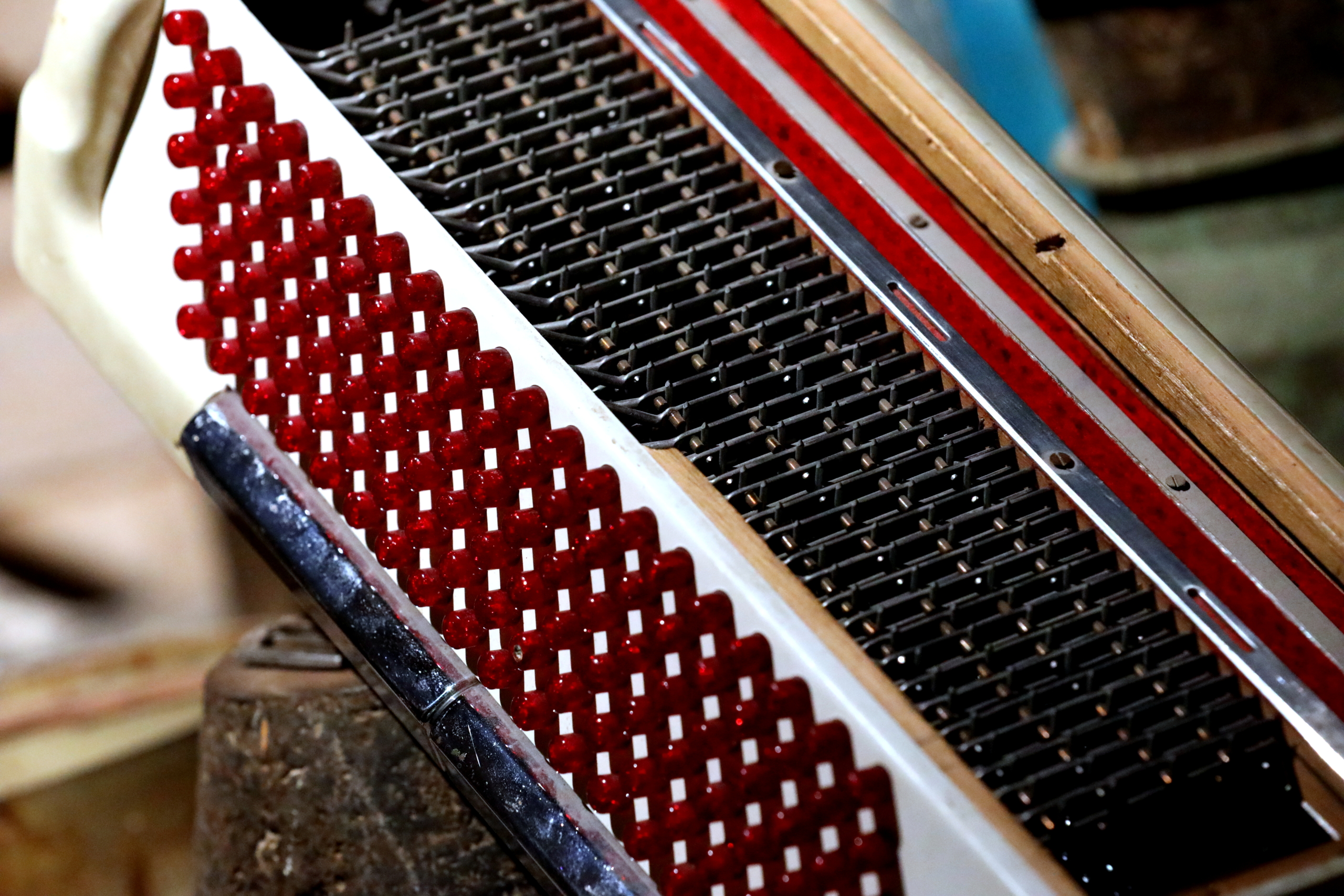